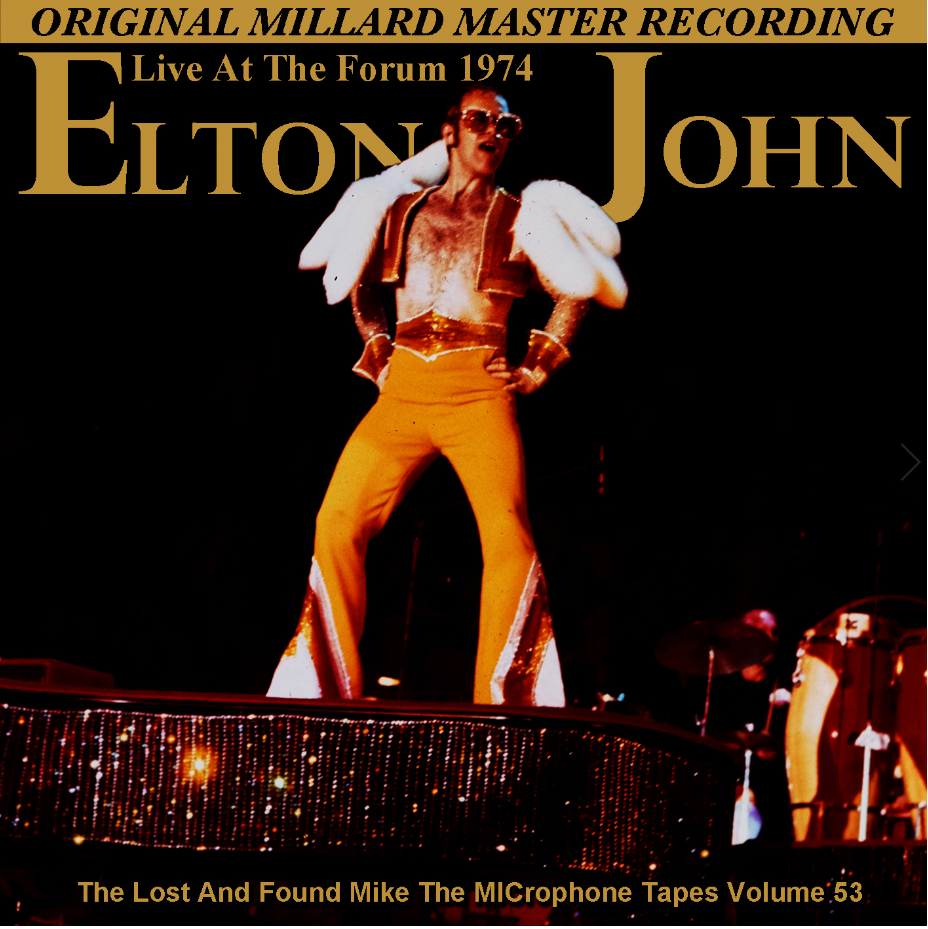 Introduction to the Lost and Found Mike the MICrophone Series

Welcome to JEMS’ Lost and Found Mike the MICrophone series presenting recordings made by legendary taper Mike Millard, AKA Mike the MICrophone, best known for his masters of Led Zeppelin done in and around Los Angeles circa 1975-77. For the complete details on how tapes in this series came to be lost and found again, as well as JEMS' long history with Mike Millard, please refer to the notes in Vol. One: http://www.dimeadozen.org/torrents-details.php?id=500680.

Until 2020, the Lost and Found series presented fresh transfers of previously unavailable first-generation copies made by Mike himself for friends like Stan Gutoski of JEMS, Jim R, Bill C. and Barry G. These sources were upgrades to circulating copies and in most instances marked the only time verified first generation Millard sources had been directly digitized in the torrent era.

That all changed with the discovery of many of Mike Millard’s original master tapes.

Yes, you read that correctly, Mike Millard’s master cassettes, long rumored to be destroyed or lost, have been found. Not all of them but many, and with them a much more complete picture has emerged of what Millard recorded between his first show in late 1973 and his last in early 1992.

The reason the rediscovery of his master tapes is such a revelation is that we’ve been told for decades they were gone. Internet myths suggest Millard destroyed his master tapes before taking his own life, an imprudent detail likely concocted based on the assumption that because his master tapes never surfaced and Mike’s mental state was troubled he would do something rash WITH HIS LIFE’S WORK. There’s also a version of the story where Mike’s family dumps the tapes after he dies. Why would they do that?

The truth is Mike’s masters remained in his bedroom for many years after his death in 1994. We know at least a few of Millard’s friends and acquaintances contacted his mother Lia inquiring about the tapes at the time to no avail. But in the early 2000s, longtime Millard friend Rob S was the one she knew and trusted enough to preserve Mike’s work.

The full back story on how Mike’s master tapes were saved can be found in the notes for Vol. 18 Pink Floyd, which was the first release in our series transferred from Millard’s original master tapes:

Before he upgraded to his legendary AKG + Nakamichi set up, Mike the Mike recorded ten shows between late 1973 and early 1975 with his original rig, a pair of Shure microphones and a Sony TC-152SD cassette recorder. In March 1975, just ahead of Led Zeppelin's return to Southern California, he upgraded to the Nak 550 + AKGs and the rest is history.

While there is no denying the upgrade affected by his new equipment, Millard's early work given the gear available at the time holds its own. It is that period we revisit with this wonderful document of Elton John at the Forum, October 5, 1974.

John is on tour in support of Caribou, with this the third of four sold-out nights at the Fabulous Forum. As Jim R notes below, Mike was still developing his taping technique, but with excellent seats he makes a fine recording this night. It is one of, if not the best recording among his early efforts, perhaps only equaled by two other Forum shows: Yes 3/18/74 and The Moody Blues 1/30/74. For the latter, Mike also recorded the opening act Shawn Phillips.

That being said, due to the age of the tapes and condition when Rob transferred them to DAT, there is some swirling and wavering in the high end that becomes more pronounced in some parts of the show than others. You'll also hear that sort of up and down movement that sometimes befalls old tapes, especially at the start of the show. That particular issue mellows out in time and largely gets masked by the music but it needed to be called out.

Setting those challenges aside, Mike's capture is clear and close, and compared to other 1974 audience tapes and documents from this tour, Mike's pull is largely a pleasure to listen to. Samples provided.

At 19 songs and running over two hours, Elton's set is one of the longest of the few taped on the '74 U.S. tour. It features generous helpings of songs from Caribou and Goodbye Yellow Brick Road. There is no quibbling with quality of Elton performances in this period and like Vol. 28 in our series (San Diego 9/29/75), John does a lot of talking in addition to playing during what was undoubtedly a magical night.

Mike recorded the show on two TDK KR90 cassettes, a precursor to venerable SA90. In transferring the Millard collection, the hubs on many of the KR tapes have broken down and transferring them requires re-shelling and splicing the original tape onto new hubs. When Rob did his DAT transfers 15+ years ago, he saved some of the original shells and for this show we have those artifacts, labeled by Mike himself before his artwork style had fully emerged. He ostensibly signs the B sides of both tapes with his name, more like a signature than his future bubble/surfer lettering logo. We're holding onto these for the Exhibition Hall in the Taper Hall of Fame.

Here's what Jim R recalled about Elton at the Forum 1974:

I attended the Elton John concert with Mike Millard at The Fabulous Forum on October 5, 1974. As usual Mike volunteered to drive us.

This concert was in the early days--Pre Nak and Pre Wheelchair--when taping life was simple. Mike would load dead batteries into his Sony tape deck and I would have a fresh set hidden inside a dummy lens case in my camera bag. If security hassled Mike about his taping gear he would simply offer to give up his batteries instead of taking the equipment back to his car. Mike told security that the equipment was expensive and did not want to risk getting it stolen out of his car. The Forum was not in the best of neighborhoods, so that worked in our favor. We would enter the building through separate turnstiles.

For this concert we did not sit together. I scored front row center seats on the floor from the box office when tickets went on sale. I had to sit there, as it was my first time sitting in the front row at a concert, though fortunately not the last. Mike obviously couldn't record from the front row, so he granted my wish and sat further back on his own.

Mike sat in the Loge Section 12 Row D, which is about as far back as the 8th row on the floor and 5-7 rows up, in direct line of sight to the PA and stage. The location also had the advantage of avoiding any crowd rushing to the front and was more protected from the prying eyes of security, lowering the chances of getting caught. At the time Mike was taping his microphones to the arms of the chairs. The hat wouldn't come into play until he got the AKGs. Also, we were still experimenting with the boundaries of our recording sweet spot. As I said before, it was the early days.

It was a great show. High energy. Elton was becoming a super star. This was the first time Mike recorded Elton. I hope you enjoy his work. I humbly include some of my pictures taken that night for the art work. 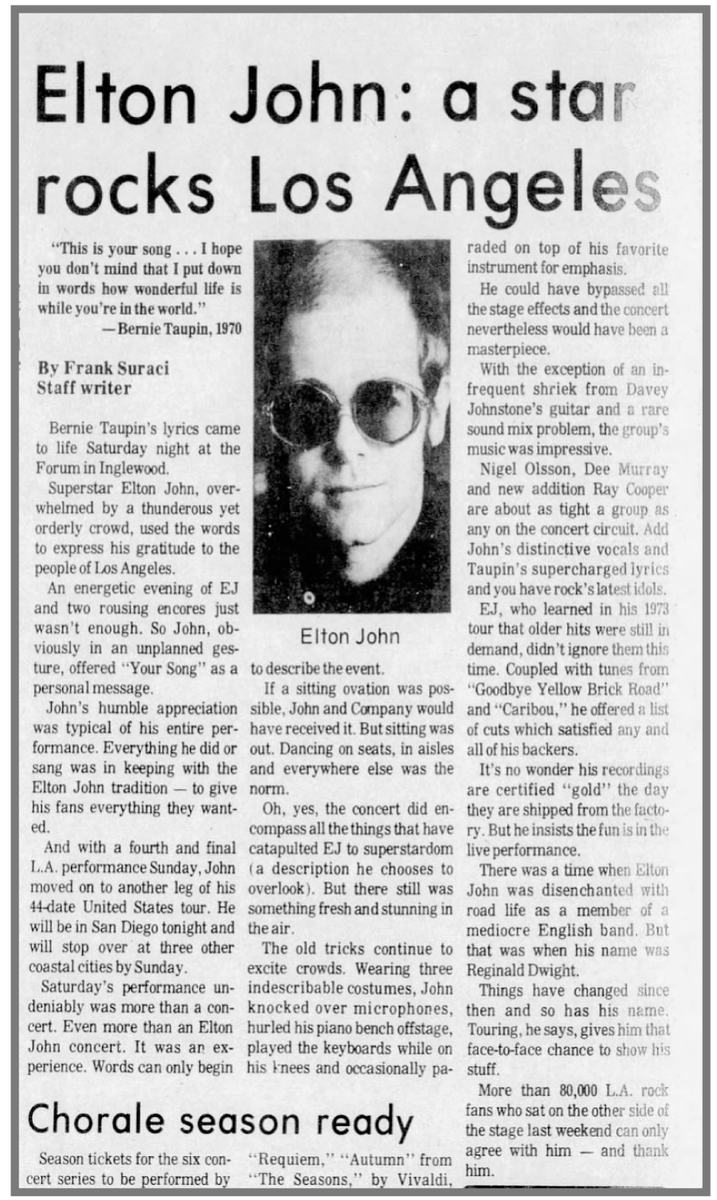 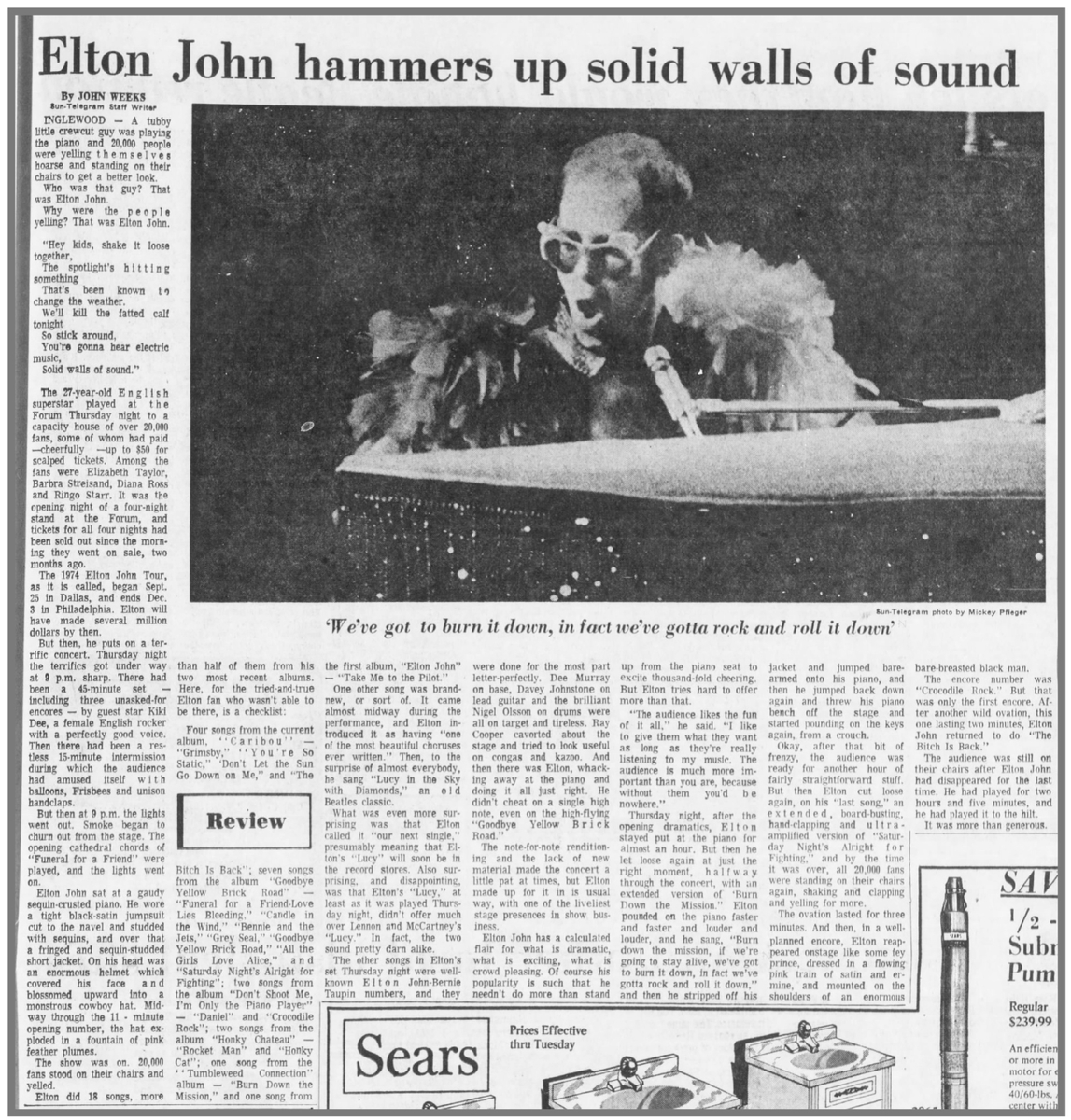